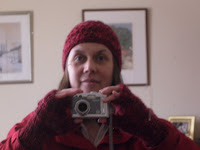 When I worked for the Electricity Board in the 1980's, a new 'big idea' was being introduced called "Just in time" stock control. It meant that instead of keeping a huge stock of cable, cut-out boxes etc in our stores, we could keep enough for day to day requirements and order replacements as they were used. So... just in time for the winter snows, I finished my hat last night. Here I am wearing it with the matching handwarmers in a terribly scary photograph just as I am about to go outside and play with the boys. It is the free pattern on the SouleMama blog , which I have knitted three times now. The first one, at the beginning of Winter was in pink and purpley shades, and I was very pleased with it. Unfortunately it has disappeared from the face of this earth. I suspect it has found it's way into No.2 daughter's bedroom, which effectively means it has "ceased to be" - I cannot remember the last time I saw her actual bed there is so much stuff lying around. Ah well - it is her space I suppose (sighing deeply). The second hat, I knitted in the same wool that I am sporting today as a birthday present for one of my step-daughters - it is such a great and easy pattern. Off to knit something else now.
Posted by Jacqui at 8:22 PM