So, quite a lot of cake has been baked and eaten in the last couple of days. A sponge and then today a fabulous but fallen parsnip and caraway cake. Note to self, don't try to bake cakes at the same time that your daughter decides to pop in a frozen pizza and keep checking it every couple of minutes.
Thursday is usually when Gran comes for the day, to let Papa have a thrash round the golf course. Gran (my mum) has Alzheimer's disease, and we are losing bits of her all the time. James does relate particularly well to her though, and he is always delighted to see her, which gives her such a lift. We also normally get a visit from my elder daughter and my grandson, Finlay, who is nearly one already! So, today we had a very nice lunch, several cups of tea and slices of sunken cake while James tried to gather every single toy and book he owns into one small bag in case Finlay tried to touch it. Finlay, of course, just laughed and somehow always managed to find something James had overlooked. 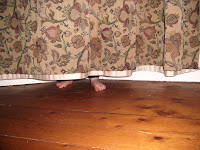 Later we played hide and seek, James's new favourite game. Can you see where he is hiding?
Good news from elder son today, who passed his Higher Maths prelim, against all predictions from his teacher. He even had the highest score in the class. He worked very hard for this, so he deserves to have done well. He has fairly severe dyslexia and his academic achievements have been fairly remarkable despite his problems. I wish that MP who said dyslexia didn't exist and was used as an excuse could meet him.
It's hard to adhere to the unconditional parenting line of no praise when something like this happens. Phrases like 'Well done' and "I'm so proud of you" just trip off the tongue so easily. Saying - oh, I don't know, something like "You must be really happy with that" just sounds a bit lame. Must dig out Alfie Kohn again and learn what I should say. Hmmm - maybe not. He knows he is appreciated just for being himself.
Posted by Jacqui at 10:26 PM

Hi Jacqui,
Please pass on my "well done!" to your elder son. I had my own focusing challenges (ADD) while writing my book, so I understand how much more energy it takes to get the same results as others who don't have these sorts of challenges. He deserves praise!

The parsnip and caraway cake sounds amazing--do you ever post recipes?

So glad you're enjoying my book. All the best with your simple, beautiful, heart-filled life.

becky kemery
Author of "YURTS: Living in the Round"
www.livingintheround.net
www.yurtinfo.org