So - after the heady excitement of coming home from hospital with James - the flurry of visitors from near and far, the joy of sleeping in my own bed, making a cup of tea whenever I want, cooking a huge Sunday dinner for family and friends, and enjoying spending time with my darling husband who had taken some leave from work - it was back to auld claes and parritch today.
This was an expression much quoted by my grandparents after a holiday, or Christmas, or some such gaudy occasion - "Aye - it'll be back to auld claes and parritch the morn'!" -(back to old clothes and porridge tomorrow) Such a typically Scottish expression - don't get carried away with yourself - all good things come to an end.
It was hard to watch John drive off today, leaving James and me alone in the house. The last day we spent at home together was the day of his accident - not one I wanted to remember. Still - there was also a sense of relief that things were getting back to normal. A calm fell over the house and I felt as if I could breathe out after a very long pause. Back to auld claes and parritch at last.
As the familiar words came into my head, I decided that we would indeed start back with a plate of porridge. There are many myths and superstitions about making porridge, but I once heard a radio interview, many years ago with a woman who had just won the World Porridge Making Championship, and she divulged her method, which I have stuck to ever since. The italics are my meddling.
1/2 cup medium oatmeal (I never bother about soaking it overnight or any other faffing round)
1 1/2 cups water. I use a wooden spoon to stir. The traditional spurtle, which is basically a stick, is not big enough to stir properly and to my mind makes the job more difficult.
Bring to the boil, stirring all the time - the oatmeal will start to thicken quite quickly.
when it is boiling add salt to taste, a single grind of the black pepper mill and a pinch of sugar, lower the heat and simmer for 4 minutes (if you don't have a timer wait until the porridge says "Perth") - serve at once. (Don't cook it for a long time or reheat once cooled otherwise it will smell like a wet washing day.) 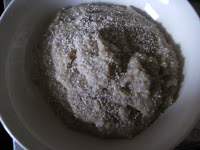 Serving and eating porridge has similar rules and regulations - particularly if you are aiming at traditional Scottishness. Porridge should be served topped with only a sprinkling of dry meal and a separate bowl of milk for dunking each spoonful into - sugar is never added - "only a Sassenach would do that! " (my grandfather's saying). I am all for tradition, and indeed porridge is very nice served simply like that. I am, however, not averse to putting all sorts of things on my bowl of meal, as and when the inspiration strikes. So, ( sorry Grandpa - hope you're not too dizzy) today we had banana, maple syrup and cream on ours and it was just grand!
I began to muse on references to porridge in literature - as you do. Burns, of course, makes several mentions - most famously in The Cottar's Saturday Night "The halesome parritch, Chief o' Scotia's food", and oatmeal is indirectly lauded in The Address to a Haggis, as one of the main ingredients in that wonderful dish.
My favourite is a strange wee vignette from Neil Gunn's The Green Isle of the Great Deep, where he describes Old Hector and the boy Art eating porridge "The horn spoons being soft, they were able to scrape their plates quietly. Old Hector shoved his plate a few inches from him and inverted the empty bowl over the horn spoon as he did at home. Art did not do this at home, but he did it now and felt the better for it." I just love the image of the old traditions being comforting for the young boy.
Then there is the evocative essay by Robert Louis Stevenson where he describes the imaginary worlds his cousin and himself build over their morning bowl of porridge. "When my cousin and I took our porridge of a morning, we had a device to enliven the course of the meal. He ate his with sugar, 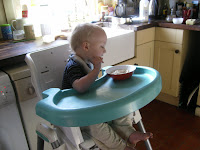 and explained it to be a country continually buried under snow. I took mine with milk, and explained it to be a country suffering gradual inundation. You can imagine us exchanging bulletins; how here was an island still unsubmerged, here a valley not yet covered with snow; what inventions were made; how his population lived in cabins on perches and travelled on stilts, and how mine was always in boats; how the interest grew furious, as the last corner of safe ground was cut off on all sides and grew smaller every moment;" (Child's Play. RLS) So - there may be Treasure in every bowl of porridge!
Our very favourite porridge story though has to be Goldilocks and the Three Bears.
Posted by Jacqui at 10:06 PM