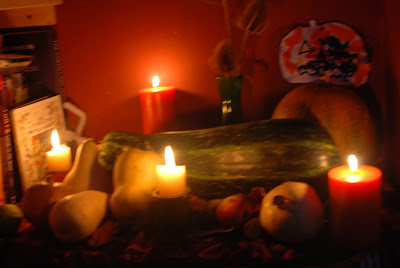 Hallow e'en has always been a big event in our family. Not least because it was my Grandfather's birthday, and my Gran always made a Clootie Dumpling for the occasion. A clootie dumpling is a sweet fruit, spice and suet pudding, mixed up and tied in a floured and sugared cloth then steamed for several hours. The smell of the boiling cotton mixed with spices is one of my abiding childhood olfactory memories, along with the aroma of charred turnip wafting from the carved lanterns. Both can transport me instantly back to frosty dark nights going round the neighbours' houses 'guising'. 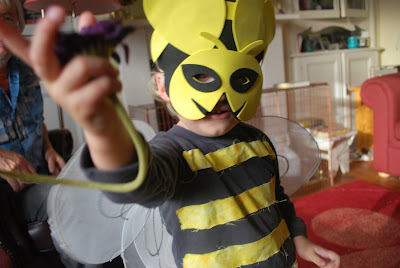 Guising (or going in disguise) goes back at least to medieval times, and probably longer. Originally it was a Hogmanay custom for adults who disguised themselves and there are reports of groups of 'Guisards' going around from house to house offering some entertainment in return for some hospitality. Of course Hallow e'en was originally the Celtic New Year's Eve, so there may be some connection there. In any case, as children we would go to houses where we knew there would be a welcome, and performed our poems, songs or joke telling in return for a tangerine and some nuts. As we called at each house in our homemade costumes, we would ask "Ur ye haudin Hallowe'en?" none of this "Trick or Treat" that we get now. And - we were expected to sing for our hallow e'en. On the rare occasion we are visited by guisers, I always invite them in to do their turn. Usually now it is some mumbled joke that we have heard several years in a row, but now and again there is the odd gem.

So, Hallow e'en for us this year meant introducing James to the customs. It is such good fun seeing these things through a child's eyes again. After breakfast he asked me if we could go now.
"Go where?" I asked
"To Halleen!" he replied impatiently.
As I put out peanuts( or monkey nuts as we call them) in a bowl I showed him how to crack them open, revealing the dark red nuts inside. He loved them, and soon the place was littered with shells. 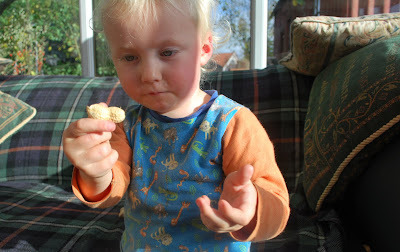 Then I made some toffee apples 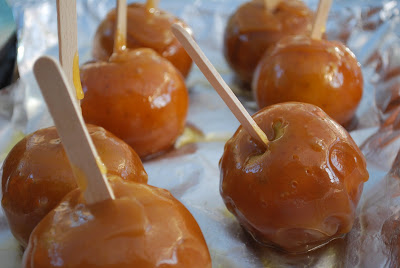 and James decided to make his own Hallow e'en concoction - chopped pork, 2 eggs (and the shells) some goats milk, a handful of suet, two apples and half a lemon. Yummmmm! He wanted to bake it and do you know? It smelt quite nice when it came out of the oven! I didn't try it though, and he had lost interest by then and moved on to something else :) 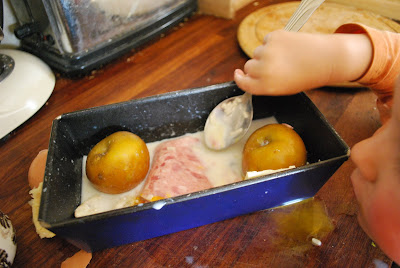 Later he put on his Bumble Bee outfit and we went to visit Gran, who is having a week of respite care in a Nursing Home. She enjoyed seeing him, and he enjoyed bouncing on her bed! 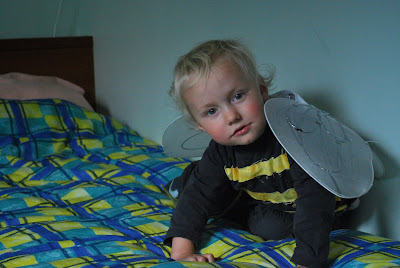 Back at home it is now my role to make the Hallow e'en dumpling. An onerous responsibility, especially when there are lots of expectant and hungry faces watching the great unwrapping. The hallmark of a really great dumpling, however, is the skin which is formed first of all by the flouring and sugaring of the cloot, and then careful drying in front of the fire. What's the verdict? 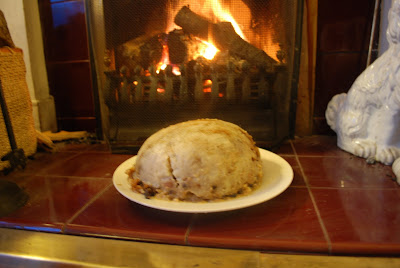 It's strange to think that my Grandfather was born 111 years ago tonight, in a coal miner's cottage just a few hundred yards from where I am sitting now. He died when I was 14, but we had such good times as I was growing up. I loved to help him in his garden and had my own plot outside his greenhouse. I learned so much even as a small child, that I still remember today, as I tend my own garden. He also had a love of Scottish history and legends, and told me stories and taught me songs that fired my imagination. he was such a great influence on my life, so Here's to you on your birthday Papa.

Here is my Gran's recipe for Clootie Dumpling - although I have adapted it a bit.

1lb plain flour
8oz currants
8 oz sultanas
8 oz raisins
8 oz suet
1 cup sugar (as this is an old recipe I assume the cup to be a teacup and not a cup measure)
1 tsp cinnamon
1 tsp mixed spice
1/4 tsp nutmeg
1 tsp cream of tartar
1 tsp baking soda
1 tbsp treacle (molasses) - warm it to make it easier to mix in
milk to mix to a soft but not runny mixture (about 7 fl oz,)

Mix all ingredients together (get your hands in about it)

Prepare your cloth - I use a muslin square, but any cotton will do - an old pillow case was my Gran's pudding cloth.
Scald the cloth in boiling water and wring out when you can handle it. I lift it out with a pair of tongs and let it drip until it is cool enough to touch.
Lay out flat and dredge with an even layer of flour and then sugar. (Very important step this!)

Tip your dumpling mixture on to the cloth and then tie up into a bundle with string.

Put a plate into the bottom of your big pan and put the pudding on top.
Almost cover the dumpling with boiling water and boil hard for 30 minutes
Continue simmering for 3 - 3.5 hours.

Lift out and put on a plate or I use a colander to let the excess water drain out. Open up and invert the dumpling on to a heatproof plate.
Carefully remove the cloth and you should see a nice white sheen on the surface of your beautiful dumpling That is the skin - the best bit!
Dry in front of the fire, turning occasionally for half and hour or so - or put in a low oven.

Serve with custard, or cream, or whatever you fancy.
Leftovers are great eaten cold the next day - or fried in butter even. 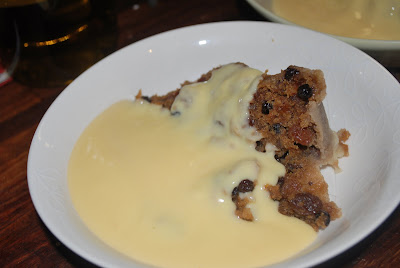 I was very pleased with this one. A bit wet at the top as I cut the string, but it dried out nicely and the skin was almost perfect. I may add a bit more spice next time, as I did feel it could have done with a bit more pep, but otherwise it was just delicious.
Posted by Jacqui at 8:01 PM

I enjoyed every word. What a great tradition for your little guy, and your recipe and pictures are mouth-watering. Thanks.

Thanks for that post, I loved reading all about your Samhain traditions.

James is an adorable bumble bee! The dumpling looks yummy and your halloween traditions sound a lot of fun. :)

Clootie Dumpling.MMmmmmmmmmmmmmmm, one of my favourites. You've just put me in the mood. My mother always made one for our birthdays--we never had a cake.