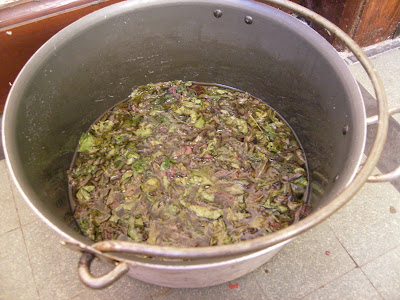 So - a post about nettles - previously trailed on Dawn's lovely blog. On Saturday it was time to strain, bottle and sample the Nettle and Blackcurrant Leaf cordial that had been steeping away for a week in our cool porch. The very nice people at Thorncroft, who make the cordial on sale in decent food outlets give the recipe on their website - so Slainte to them! I have to say, though, I did fear for my blackcurrant bushes a bit. 100g is a fair whack when they are just growing again. I was pleased that I had a few bushes to spread the picking over. I think that it is the blackcurrant leaves which impart the most flavour. During the steeping process I did worry that their was only going to be a small amount, as the leaves do seem to take up lots of the syrup. Worries unfounded, however, as I was rewarded with over two and a half bottles of very concentrated delicious pink cordial. Well worth making again - and I may try straight nettle next time. It is very strong stuff, so only a tiny amount is needed in a glass of water to make a very fine refreshing drink. I can just see me sitting in my summer garden sipping this over ice - possibly with a splash of gin maybe? 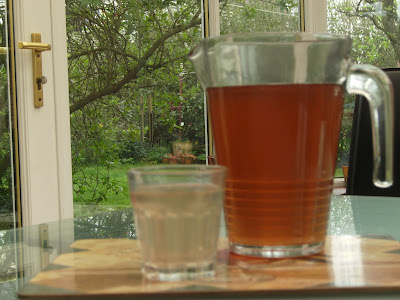 Flushed as pink as my cordial with this success James and I headed over to the Farmer's Market in Linlithgow - taking small sample for the Slow Food rep. They were doing a bread tasting comparing homemade bread with a coupleof loaves from the bakery stall that attends the market. Well, of course there was no comparison - even from the smaller bakery - homemade won hands down. We had a pleasant discussion about local food and how very few - if any of the food stalls at the market were 'local'. Most of them come from Ayrshire or even Argyll. We also spoke about the Fife Diet where a couple tried to eat produce that came from withing the Kingdom of Fife itself. I will blog about this another time as I can go on at length about local food and living in a food desert, so - back to our jaggy friends.
My next stop was the wonderful smelling Caurnie Soap stand - a mouthwatering array of natural soaps in huge rounds like whole cheeses. three wedges for £10. I chose Bog myrtle, Patchouli (I was a teenager in the 70s) and Nettle. "You don't get as much of the nettle because it is made from the essential oil, which is very expensive" commented the saleswoman, smoothly slicing off a hunk the size of Ben Lomond! Hmmm - I wonder how you extract the essential oil? Given the amount of nettles on my patch, we could be talking about another oil boom here! 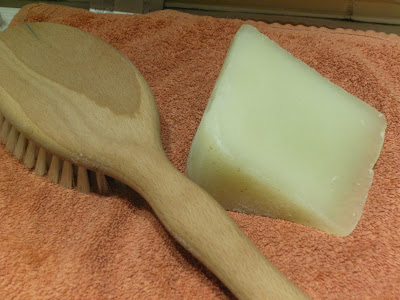 No - I think I'd rather make Nettle wine instead - which is my project for this week. It is pouring rain this morning, otherwise I would have been out picking the tops right now. We have already enjoyed several pots of nettle soup this season and hope to have a good few more - not to mention nettle risotto and I am sure I have a recipe for nettle haggis somewhere. My fingers are tingling already! 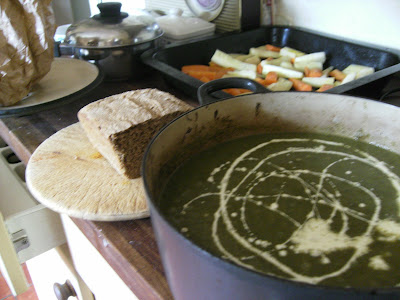 Ohhhh can I have your nettle soup recipie please?? Looks yum! Uma x

I was just about to ask the same :) We could make so much soup with the nettles we have here!

Oh, and how wonderful that you managed to breast-feed while James was in traction for 2 weeks. What a shame it wasn't encouraged. I know if sunnyboy was in that situation he would be wanting to breastfeed :)