This week we have gone for a book that we have been reading lots lately. The Whales' Song, written by Dyan Sheldon and illustrated by Gary Blythe. Again this book originally belonged to Krissie, my younger daughter, and still sits on the bookshelf in her room, but James has been captured by it and pretends to be one of the whales. 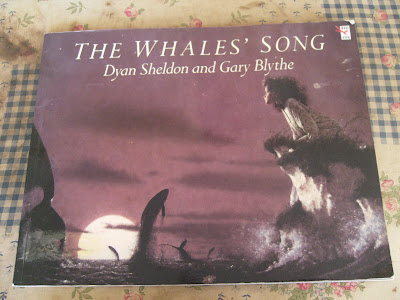 It is a gentle story about Lilly, whose grandmother tells her stories of when the whales came to visit, and what magical creatures they are. The voice of the world - in the guise of uncle Frederick dismisses the stories as nonsense, but Lilly falls under their spell. 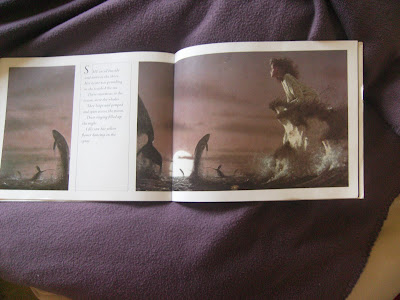 And right enough - one night the whales do come to dance and sing for her.

She raced outside
and down to the shore.
Her heart was pounding as she reached the sea.
There enormous in the ocean, were the whales.
They leaped and jumped and spun across the moon.
Their singing filled up the night. 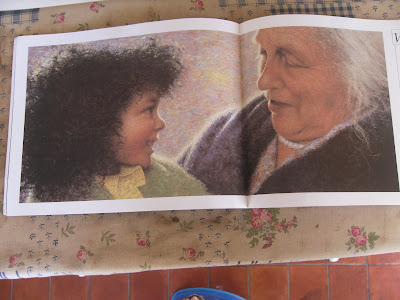 How wonderful to see such a sight. And with Gary Blythe's heartbreakingly beautiful illustrations, you could almost be there.
Posted by Jacqui at 9:40 AM

We thought that was a lovely story, and read it many times!

What an enchanting book! The illustrations do look incredibly beautiful.

Thanks for the comment about the cakes and yep they all still went lol, there was a batch of chocolate ones that went the same way, but they were still scoff so quick I didn't get chance for a photo LOL
Rayburn here too.
big love to you and your family, am loving your blog.
xx

Lovely book. Will have to add it to Phoebe's wishlist i think. :-)