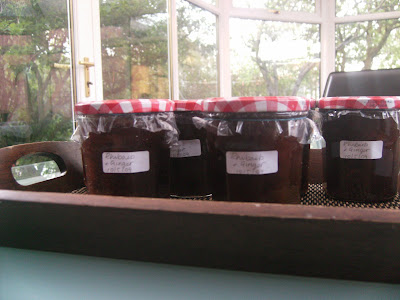 The first of this year's jam - Rhubarb and Ginger is now all potted up and arranged on the cool cupboard shelf. I am so pleased with this, because we are just finishing the last of the plum jam from 2008. We have been self-sufficient in home-grown, homemade jam for a whole year!!!. We give pots away as presents and being Scots, we eat lots of pieces on jam (jam sandwiches), so to have made it through the year without buying any is quite an acheivement, even if I say so myself. Rhubarb is the first of the year - I will make 2 or 3 batches before the end of June (yes, we have a big rhubarb patch :) . Blackurrant and strawberry will be next, followed by raspberry and plum.
Molly Weir, in her wonderful biography of growing up in Glasgow between the wars, describes her delight at finding anold forgotten fruit garden in an empty property next to the office where she worked. She and her mother and brother returned later and filled bags and every container they could carry with rasps and blackcurrants to make their jam. Molly's mother scorned manufactured jam "She's the kind o' wummin that would have shop bought jam oan her table!"was how she dismisively described a woman who had a different view of homemaking from herself :) 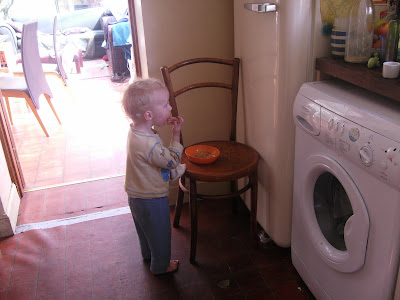 James enjoys the skimmings on a crumpet - appropriately still wearing his jammies
Posted by Jacqui at 9:04 PM

I've never made jam, but I would love to though because shop bought jam is just not the same. Jam and little boys in pyjamas is such a lovely sticky combination :)