A few hundred yards aways from our house, a new railway station is being built. A rail link, closed in the late 1950s, is being reinstated, affording us direct access to both Glasgow and Edinburgh by train. 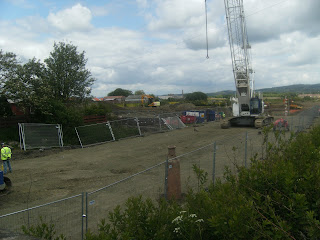 The work is really intensive right now,with the construction of the station, the car park, and all the attendant bits of concrete laying that seem to go on with such projects. James is in his element and he likes nothing better than to go to the farm road adjacent to the site and watch the diggers do their stuff - and there are some seriously heavy duty pieces of equipment trundling up and down our road. A sign informs us that the first train will depart in December 2010. 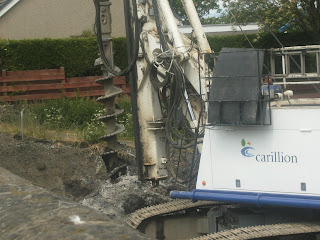 Now - this is a good thing. It's what we all want - a decent public transport infrastructure - taking polluting cars off the road - connecting communities, more opportunity for all. Not to mention the knock on effect of elevating the house prices in the area. We will live within easy walking distance of the station, 20 -30 minutes until we are in the centre of either of our two major cities. 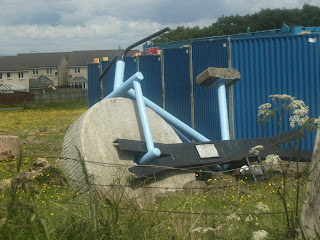 But... we are losing too. The redundant railway had become a much used and loved cycle path and walkway. A wildlife haven and just a place to escape. Setting out for a walk we would decide which way to go - east or west - always reminding me of Proust's dilemma - the Guermantes way or the way by Swann's. West was always better in the summer and winter - the territory was open, the skies huge, and the verges covered in wildflowers. Spring and autumn was the time to head east. Long sweeping avenues of beech trees, fields of baby lambs, or silent sheep, blackberries and rosehips were the treasures to be found there. Artworks were dotted along the way, - it was sad to see one of them dumped and broken at the back of the site huts. 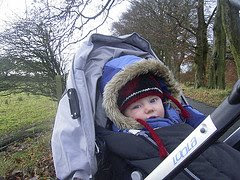 I walked here most days during my pregnancy with James - normally towards the west, as my favourite tree was there, and I would touch it's trunk and talk to it.  The morning that I discovered I was expecting a baby and the age of 45, I met 4 magpies on the trail. My husband's tree was on the eastern path - an old beech that looked like Treebeard from the Lord of the Rings. Walking with James - either in the buggy, or the sling was an almost daily pleasure. We threw autumn leaves in the air and tried to catch them, played inside the hollow tree, listened to the music of thewind rattling the broom seedpods, watched a hairy caterpillar cross the path in front of us, and played for hours in a flooded low lying section. All this is gone, save the memories; the trees cut down, the water drained, the wildlife concreted over. Our paradise is being paved.
Network rail have pledged to reinstate the cycle path, but it will run alongside the railway. Until then we have to find other places to wander. I know I will use the new rail service, and I will say how great it is to be so close to the station, two great cities on my doorstep - and it will be. But it won't compare with sunny days spent splashing around with a laughing boy. 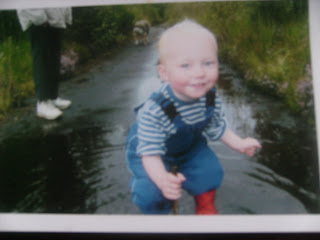 It sounds like it has been a really special place and I can understand your ambivalence. The post above is pretty shocking.