This week we are reading Dinosaurs and all that rubbish by Michael Foreman, which we bought in a very cosy 2nd hand bookshop opposite The Meadows in Edinburgh. 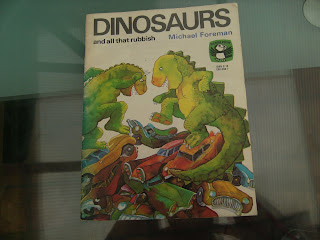 In this fable, Man has stopped at nothing in his bid to reach the stars. He cuts down all the trees, burns whatever he can in his attempt to build a rocket. Smoke and fumes poured out and the Earth was soon covered in waste and rubbish. When all the damage was done, Man finally set off in his rocket to the stars. 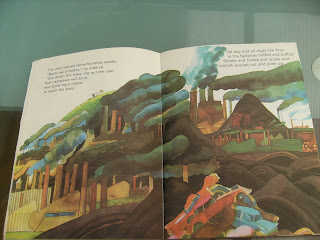 The heat of all that rubbish woke the dinosaurs who had lain asleep underground for thousands of years. This is James's favourite page.
A dinosaur held his nose
as he looked around.
"POOH!" he said.
There is nothing on this planet but mess.
If we are going to live here
we'll have to get busy" 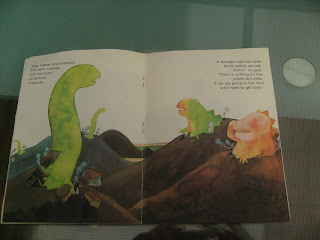 So they clean up the Earth, and forests and flowers grow again - the world becomes a beautiful paradise once again. Meanwhile, Man has reached his star and found that there was nothing to see. He sees a beautiful blue star in the sky and sets off for it. Once he arrives he doesn't recognise the planet that he had trashed before, and thinks he can take over. The dinosaurs have other ideas, and soon put him right, reminding him that the Earth belongs to everyone and they must all play their part in enjoying and caring for it. 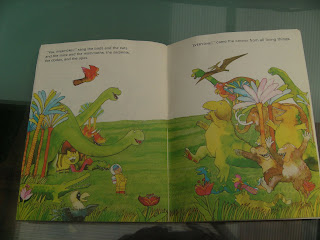 A very relevant read in the current environment. Interesting that it was first published in 1972! I wonder if the planet would be in better shape if the dinosaurs had woken up then.
Share lots more books at Canadian Home Learning.

Hi! Thanks for stopping by my blog. This sounds like a great book. My girls love dinosaurs. I'll have to add this to our list of must reads.

Have a great week!

Oh this looks a fantastic book, I'm going to look out for this one! Thanks for sharing :)