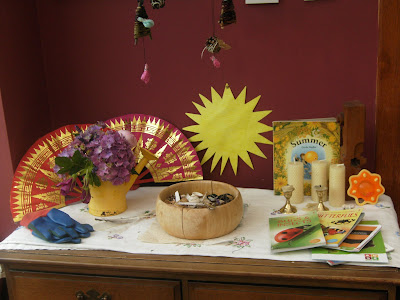 This is our Summer seasonal table - still has that big old sun there and a couple of gorgeous fans I found in the fair trade shop in Linlithgow for £2 each! They have been used quite a bit already, as the conservatory gets really warm during the day. Wooden bowl full of shells, flower heads, seed pods etc, a couple of bug and butterfly spotter guides for easy access, James's gardening gloves and his watering can which he allowed me to use as a vase - containing some roses, hydrangea and lavender from the garden. Hanging above is a bee mobile with willow hives and paper flowers. The bees are made from pine cones with yellow wool wrapped around them and greaseproof paper wings. I first saw this idea on Mama4's blog - A Smile a Day. Mama's were much better than these, because she had used alder cones, which are more bee-like. Mine are far more blowsy. 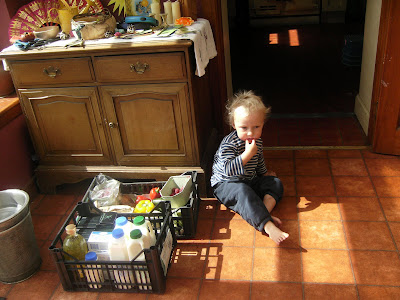 I am going to be changing the location of our table soon, as this space is right by the side door - the family and friends door. As a consequence, my seasonal display often feature items such as car keys, the dog's lead, handbags, soft drink cans, and once (shock) a fag packet :0. Just to make the point - here is a picture I took yesterday just after the organic box was delivered. James immediately made for the punnet of raspberries, and i couldn't resist snapping the moment. Later on when I downloaded the days shots I noticed my 'seasonal display' lol. I have a space in mind, but it needs a lot of decluttering and some shelf building. 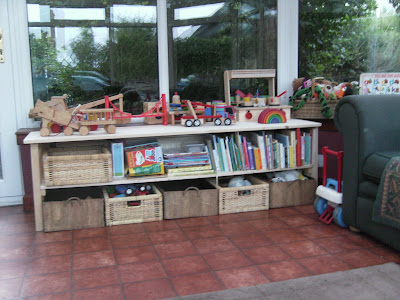 Now shelf building is not a problem for my clever husband. He has just constructed this masterpiece to hold James's toys and books. These were previously stored in various boxes and in different places around the house. This did not work as chucking everything into one box means that the toys at the bottom are rarely played with,and play can be limited. I felt it was important that his toys were in the family living space, as that is where we spend our time. I don't like the idea of him having to go to his room to play - he doesn't have a room anyway as we co-sleep and his older brother and sister have the other bedrooms. This is a really small house - a bit like the Tardis in reverse, it looks like a sizeable bungalow from the outside, but inside it is a typical 1930s design. Of course we didn't really expect to have such a wonderful addition to our family when we first moved here! 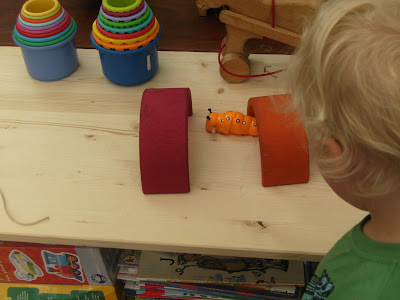 Anyway, I am really pleased - no - thrilled with how this has turned out. All the toys are now accessible and together; cars in one basket, blocks in another, dressing up clothes - you get the idea. James has already played such imaginative games with toys he had forgotten about, and his creativity seems to have taken a huge leap. Happy, happy happy me!
Posted by Jacqui at 9:42 PM

Wow! Wonderful! He couldn't make one for me could he?! :) Lovely pics and your season table is gorgeous too!

I love what you've done with James toy shelves and the seasonal table is beautiful. Lots of good ideas in this post :)